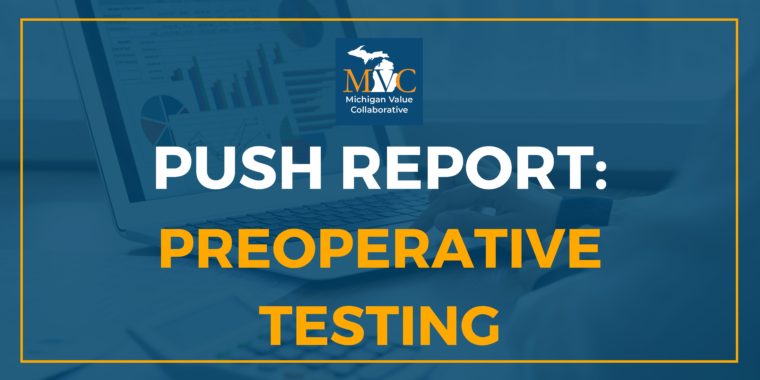 The report distributed this week had many similarities to the version distributed earlier this year in April, namely that members continued to see their rates across a variety of tests for three elective, low-risk procedures performed in outpatient settings: laparoscopic cholecystectomy, laparoscopic inguinal hernia repair, and lumpectomy. Claims were evaluated for the index event as well as 30 days prior to the procedures for the following common tests: electrocardiogram (ECGs), echocardiogram, cardiac stress test, complete blood count, basic metabolic panel, coagulation studies, urinalysis, chest x-ray, and pulmonary function.

The latest report has a few key differences from the spring version, the most significant of which is that it utilizes claims from Blue Cross Blue Shield of Michigan (BCBSM) and Blue Care Network (BCN) plans exclusively. This allows members to see MVC’s most up-to-date data; the report includes index admissions from 1/1/2019 through 12/31/2021. In addition, since the report contains BCBSM/BCN data only, there is no case count suppression, whereas members would only see their data in the spring version if they had at least 11 cases in each year of data for the three combined conditions.

The latest report also included a new figure for absolute change in any preoperative testing from 2019 to 2021. For each hospital, this appears as a caterpillar plot of absolute change percentages for their highest-volume procedure among the three low-risk surgeries in the report. Members can see the percentage change—positive or negative—in their testing rate for that surgical condition, as well as how their absolute change compares to the rest of the collaborative. For example, hospitals that perform more cholecystectomies than hernia repairs or lumpectomies saw a wide range of both increases and decreases in preoperative testing rates from 2019 to 2021 (see Figure 3).

The blinded hospital in this example observed very little change in its testing rate for cholecystectomy (-1.6%), and the MVC average was similar (-2.2%). This showcases that although the collaborative is not seeing much change to overall rates for any testing over time, individual members might see greater variability over time for specific tests or procedures, especially in instances of low case counts.

Members will be able to take those deeper dives into their rates for specific tests in the figures that make up the remaining pages of the report. Viewing one’s preoperative testing rates for each specific test can help members understand if any specific tests are driving their overall testing rate. One area of opportunity, for example, could be to reduce one's rate of cardiac testing, specifically ECGs; the rate of ECGs is very variable across the collaborative (see Figure 4) and could lead to a cascade of care. 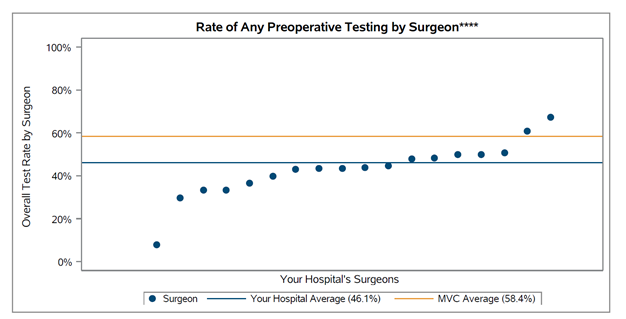 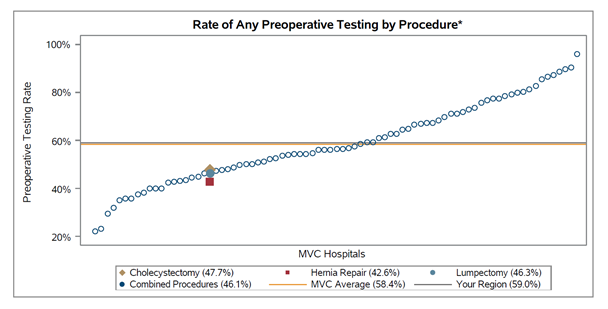 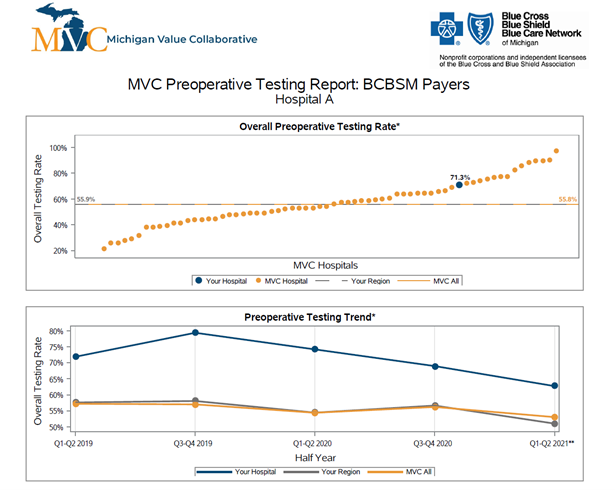 Preoperative testing, especially in low-risk surgical procedures, often provides no clinical benefits to patients. Despite this, these services continue to be ordered regularly at hospitals across Michigan. Eliminating unnecessary and, in some cases, potentially harmful preoperative testing represents a clear opportunity to improve value in surgery. The MVC Coordinating Center uses administrative claims data and engagement with MVC members to try and reduce the use of unnecessary preoperative testing for surgical procedures to improve quality, reduce cost, and improve equity of care delivery throughout Michigan. The MVC Coordinating Center’s work on this issue is supported by a stakeholder working group to advise ongoing activity and provide insights on the best approaches to improve member awareness and practices.

This latest preoperative testing report also marked the conclusion of one year’s worth of activity in support of MVC’s Preoperative Testing Value Coalition Campaign. As part of MVC’s commitment to improve the health of Michigan through sustainable, high-value healthcare, the Coordinating Center developed specific focus areas to drive improvement. These are termed ‘Value Coalition Campaigns’ (VCCs).

In an effort to communicate progress on its Preoperative Testing VCC, the Coordinating Center recently compiled a 2021 Preoperative Testing Progress Report (see Figure 2) and included it as an attachment with the most recent report communications. Accomplishments included the development of educational flyers and resources, a published manuscript, partnerships with fellow Collaborative Quality Initiatives (CQIs), and custom analytics prepared for members. In addition, the Coordinating Center set several goals for 2022, such as developing provider-level reporting and hosting a dedicated symposium or workgroup, among others. 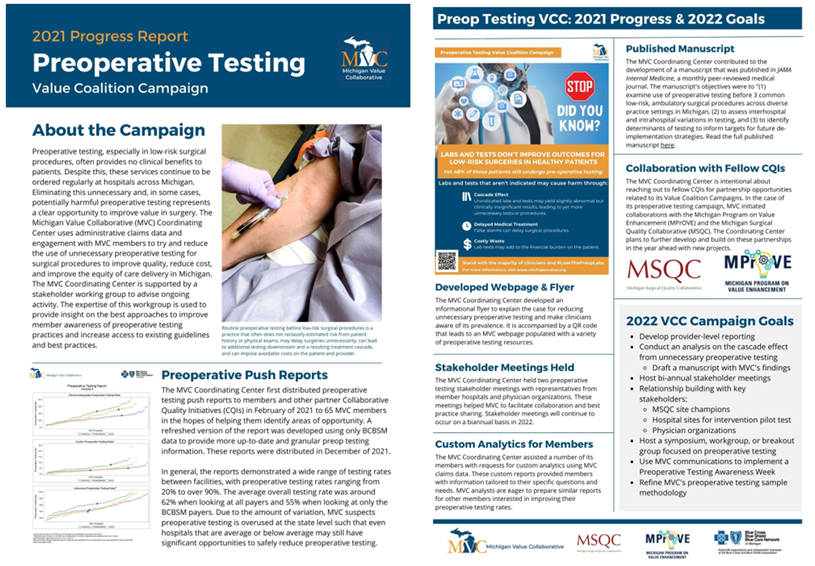 The Michigan Value Collaborative is eager to reduce unnecessary preoperative testing. If you are interested in a more customized report on preoperative testing practices at your hospital or physician organization or you want to learn more about the stakeholder working group, please contact the MVC Coordinating Center at michiganvaluecollaborative@gmail.com.