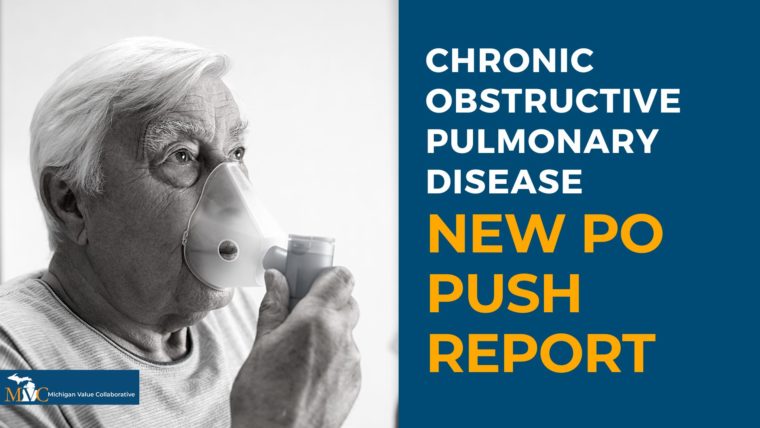 This week the Michigan Value Collaborative (MVC) introduced a new push report for its physician organization (PO) members focused on chronic obstructive pulmonary disease (COPD), providing a tailored version for each of MVC’s 40 PO members. This new push report was created in response to member interest in improving the quality of care for chronic diseases. It utilized 30-day claims-based COPD episodes from Medicare Fee-For-Service, Blue Cross Blue Shield of Michigan (BCBSM) PPO Commercial, and BCBSM Medicare Advantage with index admissions from 1/1/19 to 6/30/21.

One feature the MVC Coordinating Center is excited to highlight is the inclusion of 30-day readmission rates by major comorbidity categories for COPD. Rates were assessed for a PO’s attributed COPD patients overall as well as for attributed patients with congestive heart failure, diabetes, and vascular disease (see Figure 1). These comorbidities are assessed using diagnosis codes on claims in the six months prior to the patient’s index hospitalization. 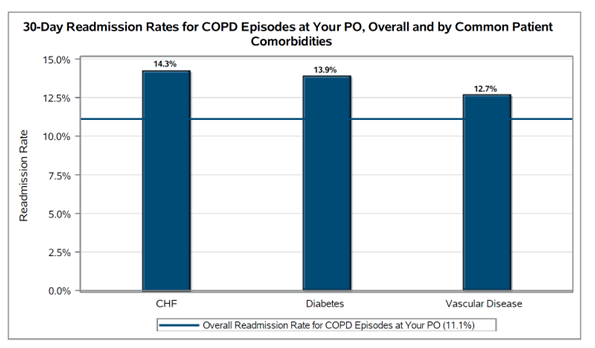 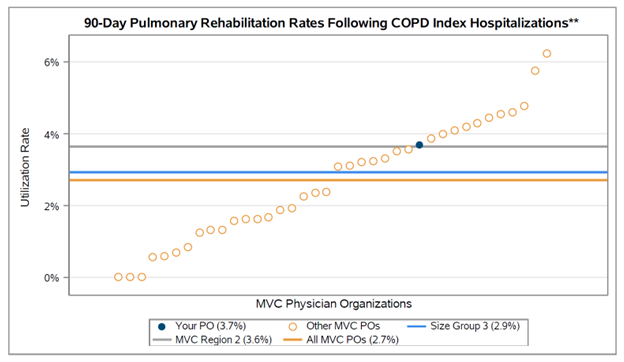 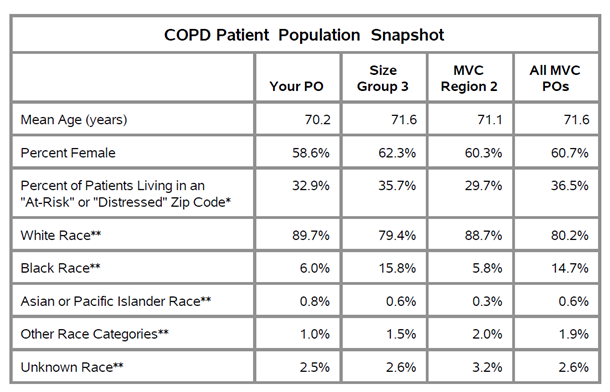 A second table provides information on index hospital locations of care for the PO’s attributed patients, comparing the percent of patients treated at each site as well as each index hospital’s average 30-day total episode payment.

The COPD PO report is also being shared with members of the newly established lung care Collaborative Quality Initiative, commonly referred to as INHALE (Inspiring Health Advances in Lung Care). INHALE focuses on patients with asthma and COPD. They disseminate strategies to improve outcomes in these patient populations and reduce the costs associated with asthma/COPD care.

MVC also partnered with a fellow Collaborative Quality Initiative to provide POs with a provider resource that may be relevant to their work with COPD patients. The Healthy Behavior Optimization for Michigan (HBOM) team provided its Quit Smoking Resource Guide to send alongside MVC’s report. HBOM aims to ensure that all smokers who are interested in quitting receive the support and resources they need to be successful. Read more about HBOM’s materials and efforts on the HBOM website or in MVC’s May spotlight blog.

If you have any suggestions on how these reports can be improved or the data made more actionable, the Coordinating Center would love to hear from you. MVC is also seeking feedback on how collaborative members are using this information in their quality improvement projects. Please reach out at Michigan-Value-Collaborative@med.umich.edu.

Reducing Admissions and Readmissions in the COPD Patient Population

At a recent MVC chronic obstructive pulmonary disease (COPD) workgroup, representatives from McLaren Physician Partners presented on their recent quality improvement initiative involving their COPD patient population. McLaren Physician Partners worked to identify areas for improvement within this specific patient population and found some common patient struggles consisted of higher utilization of the emergency department and in-patient settings, as well as higher readmission rates, specifically among their Medicare patients (38%). Five nurse managers were tasked with doing case reviews in order to identify possible areas for improvement. Five to ten patients that had three or more encounters in the last six months were taken from each nurse managers case load. Around 83% of those patients had other significant comorbidities (e.g. Diabetes Mellitus, Congestive Heart Failure, Hypertension.) Additionally, the reason for readmission was most often related to either respiratory insufficiency or a cancer treatment side effect.

Care managers then engaged the patients and went over a questionnaire with them. Approximately 68% of these patients had a misunderstanding of their medication, 26% had environmental barriers, 14% were not compliant with medication, and less than 15% reported an inability to afford medication/devices. Readmissions related to disease progression and inappropriate medication use were the major contributing factor to higher utilization of the in-patient setting and emergency department. Additionally, all admissions and readmissions were related to some form of respiratory insufficiency or a cancer treatment side effect.

Due to the time of implementation, COVID-19 impacted the type of intervention that could be put into place. McLaren Physician Partners opted to adopt a telephonic intervention in order to address education needs and remove barriers. Specific needs related to managing medications and compliance, triggers that led to an exacerbation, and developing a plan of action at the onset of first symptom were addressed. Additionally, the intervention sought to minimize and remove barriers where possible (e.g. cost of medications, transportation issues for visits). Lastly, a consideration was made if a patient was a candidate for palliative care.

Nurse navigators looked into possible ways to engage patients differently in order to hopefully prevent an exacerbation that caused an admission or a readmission. They were aware that what they were doing wasn't working, and needed some sort of upgrade. A toolkit was developed that was sent to the patient prior to a one to two-hour phone call scheduled in order to  help the patient understand this toolkit. The kit requires active participation and helps the patient develop specific goals and actions to take when they see signs of a potential exacerbation.

After implementation of this pilot program, all navigators came together to discuss their findings. Many things were noted, including the fact that patients did not know the difference between their inhalers (long-acting vs. rescue). Additionally, patients often didn't know that by identifying certain triggers, some symptoms may have been preventable. Of the patients who received and engaged in this telephonic intervention, the readmission rate for those who had been recently discharged decreased by more than 20%. Overall, McLaren Physician Partners saw a decrease in their hospitalizations due to the implementation of this program.