Earlier this week, the MVC Coordinating Center shared a new hysterectomy report with physician organizations (POs). This is the third report MVC has created specifically for its PO membership; MVC launched a joint replacement report in 2021 and a colectomy report earlier this year.

Hysterectomies were identified as a focus area in partnership with POs, who expressed an interest in more reports on surgical conditions. In addition to being surgical, hysterectomy aligns with PO activity for a Blue Cross Blue Shield of Michigan (BCBSM) Physician Group Incentive Program (PGIP) women’s health initiative. To align with the metrics used by this BCBSM PGIP initiative, this report was limited to women aged 18 to 64. The report incorporated claims from 1/1/19 – 6/30/21 for BCBSM PPO Commercial and BCBSM Medicare Advantage. Information on common comorbidities was included, as well as a patient population snapshot table showcasing race-based demographics in the hysterectomy patient population. 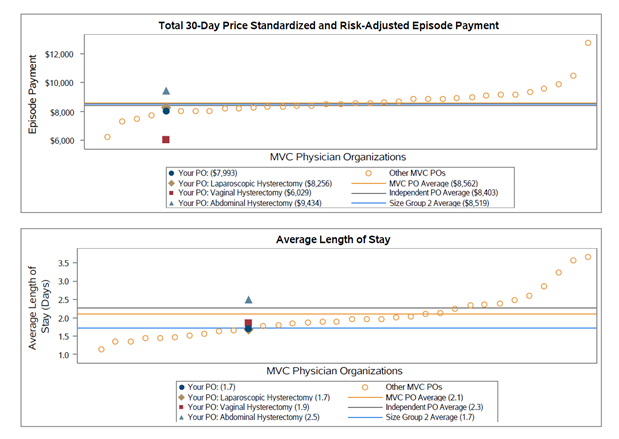 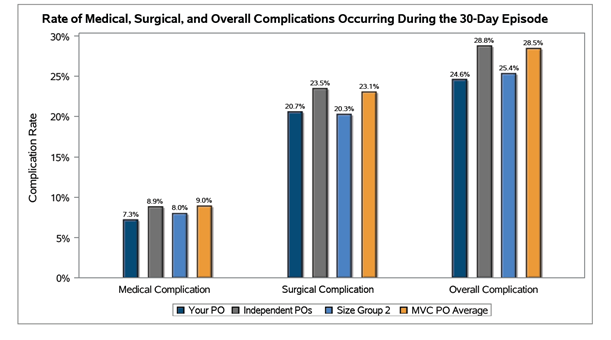 Preoperative testing rates were also incorporated since some of these types of tests are commonly ordered prior to hysterectomies but may not be clinically indicated. Claims for the index event as well as 30 days prior to the procedure were evaluated for electrocardiograms, x-rays, urinalysis, blood tests, and basic metabolic panels. These tests were identified using CPT codes, which do not distinguish between testing for preoperative purposes and testing for other reasons. Tests that were performed in the emergency department or inpatient setting were not included. Across all MVC POs, the most common types of preoperative tests performed were blood testing (which includes complete blood count, basic metabolic panel, and coagulation tests) and basic metabolic panels. The least common types of preoperative tests that were utilized were X-rays and urinalysis testing (Figure 3).

To ensure the continued provision of the highest quality information, MVC engages regularly with PO members to drive the formation and improvement of PO-specific reports. If you are interested in sharing feedback about these new PO reports, have any specific PO analytic requests, are undergoing new PO improvement initiatives, and/or would like more information about MVC, please reach out to the Coordinating Center at michiganvaluecollaborative@gmail.com.